Categories:
Education
Leadership
School
Culture
University/College:
University of Richmond
Type of paper:
Essay
This essay has been submitted by a student. This is not an example of the work written by our professional essay writers.

Equality and diversity in education essay

According to Alsubaie (2015) classrooms are increasingly becoming multicultural by which the situation creates a new set of challenges for teachers, school administrators, and other leaders. Urban schools, with a high degree of diversity, are not exceptions from the impact of multiculturalism. It should be noted that students coming into a multicultural classroom are usually placed at a deficit, primarily because they must first learn skills on how to adjust in environments with various cultures, languages, and people. School leaders, as Alsubaie (2015) notes, have an additional responsibility of guiding students through new settings or environments. In most instances, the problem is exacerbated in the urban areas, as the school leaders have to ensure that the teachers have specialized learning practice, techniques, and education to accomplish efficiently. It is noted that teachers and school leaders who subsequently engage their students in various activities, both inside and outside the classroom have a better position of boosting student achievement. The active engagement also ameliorates the negative effects that have been observed in multicultural classrooms in the past such that positive changes are mostly exhibited.

It is important to note that leadership and power are interrelated and that a balance is required to exhibit effective leadership.  In essence, there is a need to comprehend the role of power, as well as how it can be maintained and achieved. By understanding these aspects, leaders in an urban school context can effectively interact with any pedagogy regarding the subject of urban schooling and life, as well as set the necessary policies required in advancing effective pedagogical policies. It is paramount to view that the government develops the policies, passes them and also monitors them as related to urban schooling. However, as Bell and Stevenson (2006) propose, the formulation of these policies take a linear model, as shown in the figure below: 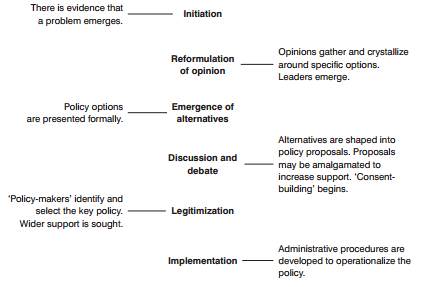 A linear model for the development of policies. Source: Bell & Stevenson, (2006).

Relationship between education and culture

It, therefore, becomes inevitable to involve the government in school leadership, as well as other stakeholders. In essence, as Riley et al. (2006) posit, there is need of the urban leaders to focus on where power lies in addressing the various challenges experienced in an urban school setting and hence the need for government involvement. For instance, urban schools exist within the diverse communities that have disengaged from the political system and which no longer choose to enact their democratic rights because they believe in governmental policies, the agenda it promotes, as well as the level of control that is primarily set by the middle classes based on the urban context.  Harris (2002) asserts that the urban context is multifaceted and holds a multiple complexities. Grace (2006) also holds the same view with the perspective that there is need for the urban leaders in the education context to focus on where the power lies to address the various problems and challenges that face the society today. In addition, as noted by Galbraith (1992), urban schools are commonly described to share a lack of power, and they also exist in communities that are primarily deficient in contributing or impacting key areas of the society.

There is a significant relationship between education and culture by which the culture of students and teachers can subsequently affect the education process. Culture can be described as a unique aspect that makes one community within the society distinct from another. Culture contains subcultures which refer to small groups that develop because of a certain feature. The feature may be language, dressing, rules and regulations or methods of interaction. For example, a class may have its subculture by which there exists some form of coded language that can only be understood by the members of the class and not outsiders.  There are diverse cultures in the school context, especially in the urban areas by which there are bound to be students from various parts of the world, such as Europeans, Asians, Africans, and Middle Easterners. Once they get together in a classroom context, it becomes difficult to manage cultural diversity for teachers, as well as school leaders. Perso (2012), describes culture as an aspect that includes values, languages, food, religion, clothing, worldview, literature, holidays, beliefs, religion, and clothing among other aspects. With such a diverse environment, it is the role of school leaders to ensure that they give a multicultural education paradigm to urban schools, which as Barndt (2007) asserts, should encompass theories and practices that support equitable opportunities, as well as academic achievement for all students.

As stated earlier, schooling, culture, and education in a democratic multi-culturist society, for example, the U.S.A., is primarily composed of people from diverse backgrounds with a diversity of beliefs, traditions, and values. As Witsel (2003) states, there is an existent relationship between education process and multiculturalism through the learning and teaching methods. Therefore, diversity has to be taken into consideration when making any decision by the school leaders. There are many challenges involved in multicultural institutions, and this assertion is supported by various researchers (Alsubaie, 2015). The researcher points out that the various challenges faced in a diverse classroom include low academic achievement, trust problem involved with the new culture, and adjusting to the new cultural environment, as shown in the figure below:

Relationship between culture and education

In addition, social class, just as in the UK, is the most significant defining feature in American schools. In essence, the existence of a class-based society as well as the role of different in play, as highlighted by Thrupp (1999) and Grace (2002), is a common theme in the entire context of urban leadership, especially in schools. The role of the middle class should also be stressed and explored about the education attainment concerns of white working students, who are the longest subset user of urban schools. Grace (2006) suggests that rather than considering the long studied issue of class people should reflect on the role of gender in urban schools in raising attainment for the subset. In addition, Riley (2009) also articulates that there is a perceived tension that is existent between white working classes and the middle class, which is complicated and long-standing and is not helped by the fact that teachers within urban schools originate from middle-class families. For this reason, understanding the needs for addressing the issue of class in the society is paramount for school leaders in their endeavors of creating open relationships with the communities. In essence, school leaders, as well as the society in general, should be ready to accept that there is often a disengagement amongst the urban communities, and therefore, there is a recognized class divide that necessitates school leaders to respond and explore these aspects.

Setting the curriculum is also vital for school leaders in solving the challenges faced in a diverse environment. For example, they should play their part in ensuring that students subsequently become active members of the society. An effective strategy is providing a holistic curriculum, which focuses on the development of students, such that they can achieve their goals, as well as maximizing the likelihood that the imparted knowledge will be of help even after they complete studying. Grace (2006) asserts that students in urban institutions should be able to develop their knowledge and comprehend their current political environment, social surroundings in addition to the economy if they are to become productive and engaged citizens. The idea is supported by the U.S. government, which develops a curriculum that is all round and encompasses aspects of diversity. The idea is to improve the skills and knowledge of the students in the main areas in dealing with individuals from various areas, including those students who come from poor backgrounds. The government can be perceived to play a vital role in developing urban knowledge. For instance, the UK government has been very active in developing various policies that are primarily geared towards improving the urban communities. These include the Every Child Matters Agenda (ECM), a policy that is created to work in partnership and also aim at achieving the goals of the Children’s Act of 204. A similar program that has been implemented in the U.S. is the No Child Left Behind (NCLB).

Analyse the relationship between education and culture

However, as Blanden and Machin (2004) argue, there is little evidence that suggests that the focus of improving the experiences of the urban learners and communities has had a lasting or significant impact, primarily because there has been minimal movement between the various social classes. For this reason, the role of creating specific policies that deal with the different challenges experienced in the urban communities may not necessarily produce a quick win. Scholars indicate that the minimum movement is attributed to the curriculum and policies by which they have too long focused on trying to the right the wrongs of an urban society rather than celebrating the elements that students bring (Hills et.al, 2009). In essence, the challenges are often experienced by creating a curriculum that subsequently does not recognize the diversity withheld in urban communities, which as noted by Hills et al. (2009), subsequently devalues the cultures, as well as the students. In addition, Weiner (2006) acknowledges the various difficulties of a predetermined curriculum, as it has little relevance to the urban learners given the diversity of the pupils regarding experiences and interests, and in most instances, the need to cover it is mandatory. However, as Weiner notes, the problem is not in the curriculum, rather in the teacher expectation. In essence, as she further posits, teachers come to the urban schools with much pre-convinced low expectations and ideas about the type of learners they will be instructing, as well as a possibility of limited success. For this reason, it is paramount that head teachers and school leaders should emphasize the staff that all children are teachable, with the right mechanism for instructing, and thus, educators within the urban environment should find the right way of making learning accessible.

Also, as Harris (2002) notes, it is critical to note that school leaders should have a strong ability and moral purpose to manage and have control of various problems in the urban context with efficiency and speed. Further, Weiner (2006) asserts that the leaders should be firm in their obligations when choosing to work in an urban setting due to the complexity of the role, and most importantly, they worked under frustrating conditions and mandated with responsibility for saving and changing lives. In addition, urban leadership needs much from individual professionals about their moral imperative, as well as the desire to create an equitable society. Riley (2009) also purports that the school leaders in the urban environment should have a clear understanding of their thinking in aspects of social justice, as well as the role of the school in addressing the issues present in the society. With the vast diversity in urban schools, there is a clear opportunity for being creative, as well as redefining the role of 21st Century leadership in an urban environment. The school leaders should prioritize on ensuring that the school is easy to reach, as well as the need to present willing and accessible parties for dialogue where responsibility is shared by the urban schools and the community.

Need a paper on the same topic?

We will write it for you from scratch!

People also read
How about making it original starting from $7.00 per page ?
Calculate the price
Get a free consultation

We deliver
a plagiarism report

Find out how it works →

Sorry, you can’t copy this text

Attention!
This sample has been downloaded 531 times

To get this sample, please, contact our support managers, and they will send it to you via email