Southwest company model of adopting the low-cost strategy in generating demand has a relationship to this quantity demand. The reduction on price in the airline industry stimulated an additional air traffic by 60%. This increases air traffic by 14 million passengers annually. There are many players in the airline industry in the United States, and this means that the supply for air travel is a surplus. Therefore, each company adopts its strategy of ensuring that it has a constant flow of passengers. In a typical market structure, a reduction in the price of a product or service leads to a corresponding increase in the demand for the same product or service. Contrary, an increase in the price of the product leads to a reduction in the need for the product and the consumers solicit for other products of the same line (Bharucha, 2016). Therefore, the fact southwest company offers relatively lower prices compared to the competitors means that their demand in the airline industry should increase considerably. Apart from southwest airline having competition in the industry, there exist other competitions from shipping and road transport. However, the fact that air travel offers long distance traveling within a short period makes it more in demand. Furthermore, surface transportation is only significant during economic downturn during when the consumers cut down on the expenses. Therefore, the company should develop a mechanism in advertising the company more so that the consumers do not feel the urgency of using surface transportation during an economic recession. 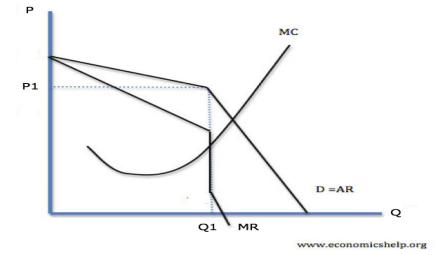 Figure 1: Price elasticity of demand in an oligopoly market structure

Southwest airline company have significantly shaped its market price and set it quite low when compared with its competitors which in turn increases customers preference to the company's service which directly leads to an increase in the demand for the southwest airline services. Additionally, the firm also applies strategic approaches which in turn enable the company to reduce its product cost, hence managing to sell its services at a low price while increasing the demand and total revenue simultaneously.

Furthermore, the southwest company reduces its operations cost to keep the prices lower. For instance, the fluctuation of fuel prices in the market can lead to increase in operational cost thereby leading to increase in fare. However, the company installs various strategies to keep the cost low. For instance, the company uses the most effective aircraft which consume less fuel. Besides, the company makes deals with the fuel companies so that they get discounted prices thereby reducing the fuel cost. Finally, consumer responsiveness in the strategies exhibited by the southwest company is positive. The company served 118,171,211 passengers in 2015 as compared to 110,496,912 passengers in 2014. 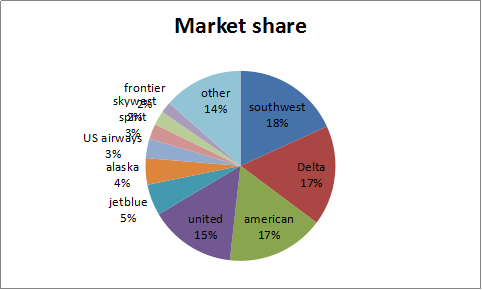 Southwest Airline had 18% share in the airline industry as at January 2015 according to the Center for Aviation which was based on the measure of capacity called the available seat miles (ASM). The market share has been consistent for the last five years. Besides, Southwest came second after Delta Airlines which had a market share of 19.2% in 2015.

Considering the passenger revenue, the southwest airline had a market share of 12 % in 2014. This means that the company competes well in the market considering that the company has a less international presence as compared to its competitors whose market share ranges from about 20 to 23 percent in air transportation industry (Behar & Ritz, 2017). Southwest Airline is the major airline in the United States which does not levy fees for customer changes in flight reservations. Therefore, those serve as a key marketing campaign that enables the company to enjoy a wider pool of clients as compared to other air service providers. Essentially, the customers believe that the company understands that their schedules can change, and therefore they are regarded as reliable.

Moreover, Southwest is also taking a significant step in modernizing their fleet so that they will be using the Boeing 737 Max plane. It is, therefore, evident that the company will have a lower operation cost because the aircraft is fuel efficient. This is because of the ever changing fuel prices. For instance, the cost of fuel per gallon accounted for 16% of the operating expenses in the company in 2003 to 29.1 % in 2014.

The entry of new firms in the airline industry in not easy. This is because the aviation industry is more consolidated in which the performing actors in the industry including southwest airline account for more than 90% of the air traffic. This means that the new entrants will share the remaining 10% which is a rather uphill engagement. However, many companies have attempted to entry into the market. This includes the JetBlue Company which entered the market in 2000. However, apart from JetBlue, new companies have struggled and failed to properly play a role in the market because of the centralization of the old players in the airline industry. Other companies such as Mesaba Airlines, Aloha Airlines, and Midway airlines have failed to perform in the industry and have closed the business because of bankruptcy.

Southwest has a smaller geographical region of operation compared to its competitors. The company majorly focuses on the United States in its operations. Therefore, the company focuses on a relatively smaller market structure. This has been beneficial to the company since the operation cost reduces. However, there is a possibility that the increased competition from major airlines can be so intense in future so that the company might be forced to edge out of the marker. The company competes with the competitors for the areas they operate, and therefore southwest airline needs to decentralize its operation to other regions in the world so that it improves its market share.

Furthermore, it is evident that in future, the competitors will emulate the low-cost strategies uses by Southwest Company to conduct their business. Besides the competitors can decide to modify the strategies since the strategies are widely known. This can pose a significant risk for the company since the competitors will be able to offer the same lower prices than southwest airline while extending their operations in the same regions the company is servicing. This will be detrimental to the success of the business since the competitors have a better market presence. Therefore, the company is supposed to continually come up with new policies and move away from the strategies already known by the competitors. It is evident that the company is making more profits and operational revenues. Besides, Southwest airlines have a huge financial stability which they can use to expand its extend its operations worldwide through entering into new markets and purchasing new aircraft and maintaining and upgrading the facilities to cater for the expansion. Proper maintenance of the premises makes them more appealing to the clients thereby boosting the competitive advantage. Even though the endeavor is costly, there is a high probability that the company will expand its market share while at the same time maintaining the already existing market.

Moreover, the southwest airline is regarded as the best company in customer service. This helps it gain a competitive advantage over it competitors and thereby have a bigger share in the prevailing market. Best customer service starts with empowering employees. Therefore, the company has done more to motivate staff who are also a major source of competition. Therefore, it is recommended that the company focuses much on motivating the employees so that they develop new strategies for customer relation. Besides, the employees should be conversant with the use of information technology equipment such as computers to boost customer service and marketing. For instance, with the ever-increasing role of social media in the advent of marketing and customer relation, the company can tap into this resource to facilitate more interface between the company and the consumers. Through social media, the company can get instant feedback and reviews on their service delivery and therefore can get new strategies.

Finally, the company mainly depends on Boeing as the sole supplier for aircraft and supply of spare parts. Therefore, this entire dependence on Boeing means that lack of willingness by Boeing to provide the needed supplies can adversely affect the business. Therefore, the company has to develop a scheme whereby they will depend on two or more different supplies and aircraft such as the star bus. This will reduce the risk involved for instance if Boeing loses credibility in the market or eventually shuts down.

People also read
Need an original essay on Southwest Airlines Case Study Sample, Free Essay for You?
Our professionals
can write it for you!
Order now
24/7 online support
NO plagiarism