Allegory of the cave essay

Right Hand Side: Objects Contemplated at Each Stage of the Map 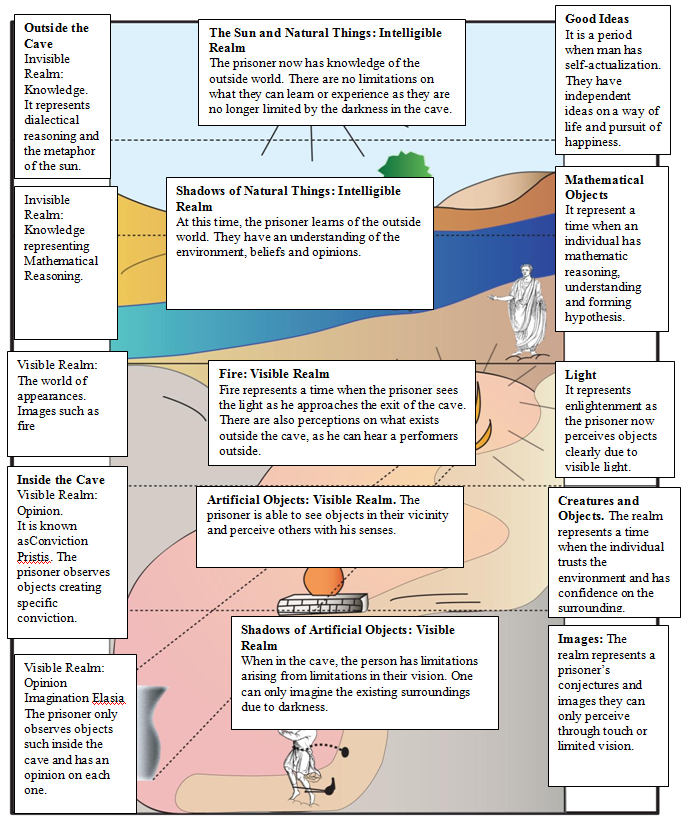 By “ideas that we have conquered,” Nietzsche refers to the successes that we have had in our lives. We can conquer an idea by overcoming the challenges associated with specific ideologies. It suggests that we can explore different areas of life and overcome different challenges and move on into the future. Some undesirable ideas come back when we are tired as we do not want to explore new areas in our lives. When we are not keen and vigilant, such ideas become easier to believe taking us back into our past. One of such areas is my career choice. Revisiting other choices that I could have made is often frustrating leaving me feeling less in control of my present. Behaving in such a manner leads to helplessness especially when I try to discuss with others on other careers I could have chosen.

John Locke defines knowledge by identifying that when sensory organs are stimulated, human beings get the idea of sensation. It is then operated by our minds to ideas of reflection. A person can only have knowledge based on their ideas, using both a simple and complex methods. He divides it into intuitive, demonstrative and sensitive knowledge. Thinking, on the other hand, refers to the use of rational judgment or thoughts. It assists in gaining knowledge as it allows human beings to retain what they learn leading to intelligence. It is thinking that allows us to gain knowledge through methods such as reading.

Thomas Hobbes, an English philosopher who lived in an era dominated by political events and civil war. It was an era of political uncertainty where the country in many ways stood divided amongst its social, political and economic classes. Political divisions among the above classes and divisions due to unequal wealth distribution lead to upheavals in a civil war which produced extremely radical group’s primarily political and religious sects. The country, therefore, became military divided (Ruddle-Myamoto, 2014). Hobbes, trained in Latin and Greek classics witnessed the political turmoil, death, and starvation and in his classical view pointed out an element of self-interest and constant desire for power. Hobbes argument is that “it is in every individual's self-interest to follow the rules upon which cooperative living is based.” I find this argument convincing and base the argument on the description of human nature conception by Hobbies.

First and according to his argument, it is through the creation of social order by people that would ascertain their well-being and preservation of their lives. Such a social order arises as a need by individuals and is executed through political authority (Hobbes and Gaskin, 2008). By observing and making an assumption about human nature, Hobbies believed in the creation of a moral, political philosophy that could create a desired social order. He further argues that it is important to view human nature on account of animal life, that is, acting on their self-interest. An act of self-interest produces a state of war and it’s only through mutual agreements to abandon self-interests that human beings can achieve the security that is only provided by social existence (Driver, 2014). Hobbes argument on social contract is based on the inability of people to rely indefinitely on own powers to secure contentment and livelihood. Therefore, they join as a socially embodied network called a commonwealth. This integrated system consists of mutually agreed contracts that are beneficial to the society and promotes a high form of social organization (Hobbes and Gaskin, 2008). According to Hobbies (2008) “the creation of a strong form of social organization leads to the formation of an artificial person (the Leviathan) that we entrust all public welfare and social order (p.160).” Through this embodied network, the liberty of the citizens is secured. Such a universal power is ideal to keep human beings united. It is the conventional power that would ensure maintenance of artificial harmony among the citizens and protection from enemies. Hobbes explains that leadership of a commonwealth can either be a single person or a group, but they must be appointed by the people. Following this, the people should submit their wishes to the elected leaders who would, in turn, give assurance and self-preservation. Hobbies define this form of ruling as sovereign. Indeed, it's because of our desires and inability to satisfy them individually that we are pushed to unite and find a common path socially.

Lastly, in Hobbes’ argument about the state of nature, we are invited to examine and consider a condition without government, that is, a pure state of nature. It is a situation where an individual is a free act and judge (Ruddle-Myamoto, 2014). He heavily criticized a form of state of nature and argued that masterless without law to restrict them from revenge and rape would cripple security upon which a civilized society is dependent. He also points out that a society in this state is subject to the uncertainty of the future and civilization (Driver, 2014). He also adds that under this state, every individual has the right to all things which creates serious conflict leading to war. Competition for scarce resources such as desirable land is potential causes of conflict in such a state (Ruddle-Myamoto, 2014). Also, lack of a universal authority excludes a possibility to solve arising disputes, and therefore internal conflict becomes inevitable. From the above argument, it is clear that corporate living is based on every individual self-interest to follow the rules that form such a society. The diverse needs of humans and the inability to sustain themselves individually brings in a state of cohesiveness with an advantage of mutual relationship just like Hobbes argument.

Ruddle-Myamoto, A. (2014). Surveying Hobbes’ State of Nature. International Journal of Philosophy and Theology (IJPT), 2(4).a

People also read
Need an original essay on College Philosophy Essay Examples?
Our professionals
can write it for you!
Order now
24/7 online support
NO plagiarism